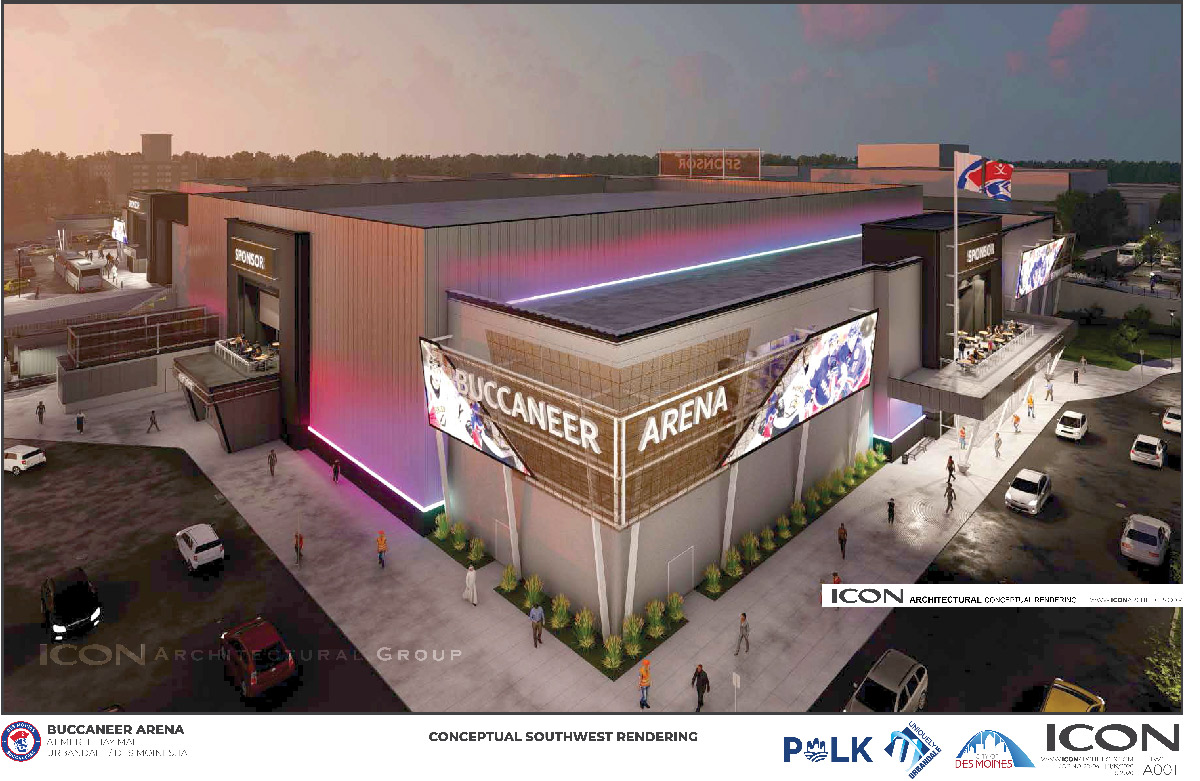 URBANDALE & DES MOINES, IA: Merle Hay and Orchard View Sports & Entertainment, owners of the Des Moines Buccaneers hockey team, are pleased to announce their partnership with the Cities of Urbandale and Des Moines to build a new 3,500 seat multi-purpose arena in the former Younkers Department Store on the west side of the shopping center. The development will be the new home of the Des Moines Buccaneers hockey team and will also include three additional sheets of ice with bleacher seating to host additional games, practices, and tournaments. In addition, a 150-room hotel is planned for the complex. The complex will be able to host regional and national tournaments as well as E-sports, trade shows and concerts.

“Redevelopment of the west side of the shopping center will transform Merle Hay into a multi-purpose, multi-needs destination both in the Des Moines area as well as the State of Iowa and greater Midwest region,” said Liz Holland, the CEO of Merle Hay Investors, which owns the shopping center. “This exciting redevelopment is a continuation of the transformation that began in 2005 with the opening of Target, and we are thrilled to be able to host the new Des Moines Buccaneers multi-purpose arena and athletic complex as part of that transformation.” Dave Henry, co-founder of the Peaceable Street Capital said, “Peaceable Street is pleased to be a financial partner with the Merle Hay team and we share the enthusiasm around the planned arena.”

“OVSE and the Des Moines Buccaneers are excited to join this partnership to provide a much needed venue for the community and Central Iowa. The Buccaneers have been proud members of the Urbandale for more than 40 years and this facility will ensure that the Bucs have a home for years to come,” stated Michael Devlin, Managing Partner of OVSE. Nate Teut, president of the Des Moines Buccaneers remarked, “We really have seen the need for a new arena especially since the damage of the derecho. A new state of the art facility will continue the growth of ice sports here and provide a championship caliber venue for the Bucs, the community and the region.”

Merle Hay is located in both the Cities of Urbandale and Des Moines. Polk County has been instrumental in the progress of this plan to date, as it has provided two acquisition loans – one for the Younkers store and one for the Sears Store – which has enabled the plan to move forward. Supervisor Bob Brownwell notes, “Polk County is excited and happy to continue our ongoing support for what is an innovative approach to the Merle Hay Mall site. The mix of affordable housing, hotel property, and entertainment along with traditional retail is an approach we support and believe will be effective.” 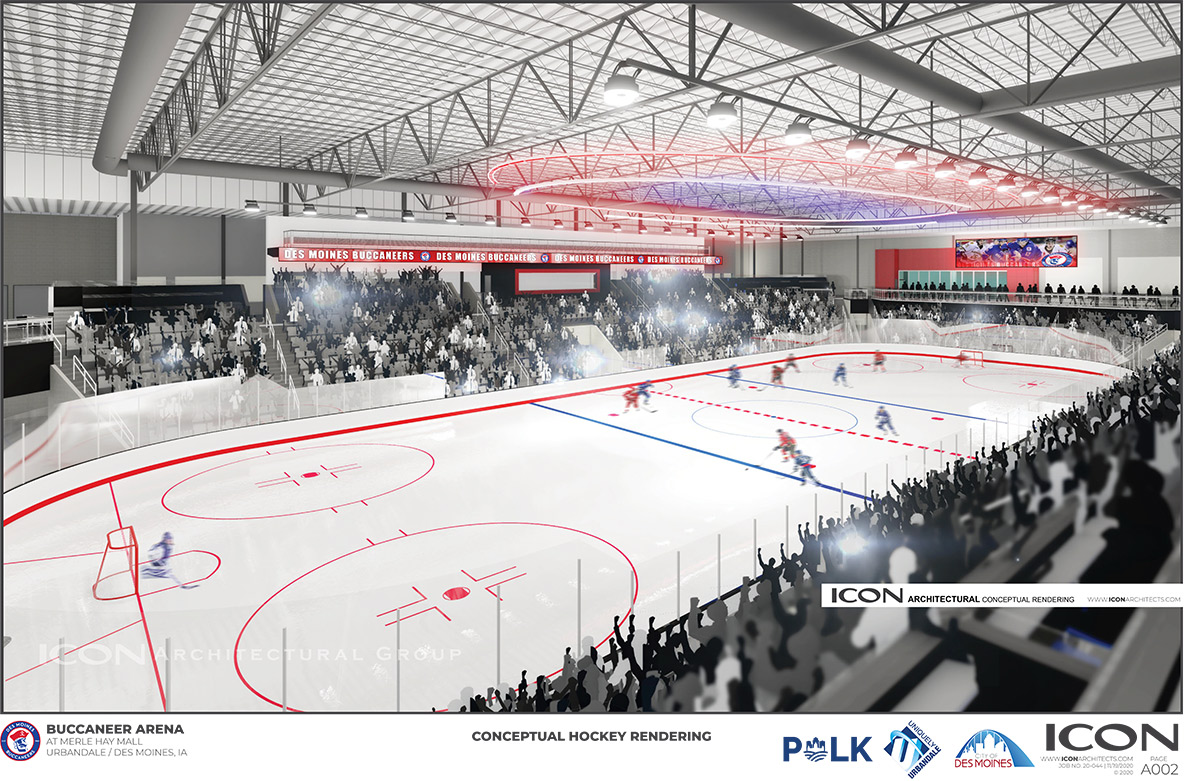 The new ice sports and entertainment center and hotel will be on the west side of the Merle Hay Mall campus that falls within the City of Urbandale. Mayor Bob Andeweg notes, “Urbandale has grown and prospered with the Merle Hay Mall since the early 1960’s. We’re excited to establish a new home for our beloved Bucs and revitalize one of our favorite shopping designations.”

The City of Des Moines will also benefit from the redevelopment as most of the retail portion of the shopping center is located in the City of Des Moines. “As the Ward Councilmember, I’m thrilled to see Buccaneer Arena move to the Merle Hay Mall. It’s going to be a strong anchor for the mall and neighborhood. We really appreciate Polk Count’s support and are happy to work with Merle Hay Mall, the Bucs, and Urbandale on this exciting project,” said Bill Gray, Des Moines City Councilmember.

The closest arena complex of this size is located in Blaine, MN so it will be a regional draw to the Des Moines area. “We’re incredibly excited about the redevelopment at Merle Hay Mall for a new home for the Des Moines Buccaneers, one of the community’s most beloved teams. The mall has become an entertainment destination in the metro, and we know our visitors will love exploring all of the new and improved offerings, and now fans will get to cheer loud during hockey games as well,” said Catch Des Moines President & CEO Greg Edwards. 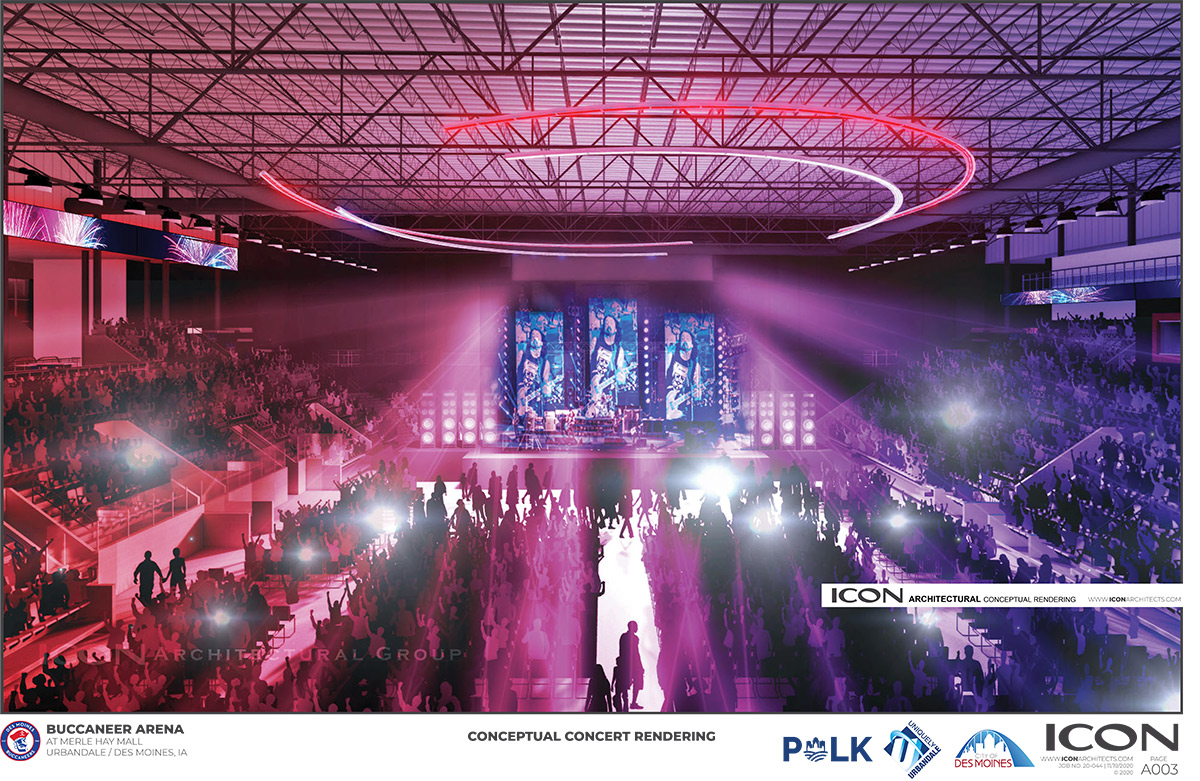